I expected to have the documentary that I shot with them ready to show it to them. So, we postponed our last visit to the kids to Saturday evening. On Sunday we all had to leave Ranchi: I, to Delhi; Aishwarya and Akanksha to Hyderabad and Paarth to Mumbai.

The documentary probed to be more complicated that we thought originally, so we decided to go to the orphanage without it. Unfortunately this means that probably the kids will not be able to see the results of their participation.

Anyway, they were all very happy to see us. They had insisted the previous day on inviting us to dinner, so we accepted and arrived on time. Dinner was delicious, and it was all cooked by some of them! They had a table ready for us, even though they always eat sitting on the ground. It was lovely.

We chatted and played few games with them, and then it was time to say goodbye. I did it personally with each of them, although some of them seem not to understand that possibly we are not going to see each other ever again. Priyanka, one of the girls, finished with her usual cry of: “Tomorrow, see you tomorrow!”

And few of them, many, came with a small present they had prepared for me: a handkerchief embroiled manually by them. I was without words.

And I left the house, the yard, the street, for the last time.

Meeting those kids almost everyday for the past months has been one of the highlights of my stay in Ranchi. I have learnt so much with those kids!

I hope that you have the opportunity of seeing the documentary about them, when is ready, very soon. I have many things to thank them.

Yes. It seems incredible, but the main stage of my Indian experience is closing this week. But I’m not coming home just yet.

I will be travelling for the next 6 weeks in different parts of this beautiful country. We had agreed some time off for me at the end of my stay, but due to some changes of plans, I got some more time for me.

I’m probably not going to miss Ranchi as a city, nor its dirty, noisy and smelly streets. But I’m sure I will miss all the people I have met here. I will most sure not miss my room with its uncomfortable bed and ridiculous shower, but I will miss all the moments I have shared with Ritu, Jesu, Lourduraj, and the students. Like cooking dinner with Ritu, going to Gran Bazaar to get the groceries with Jesu, going to some remote part of the city to shoot video for the Christmas carols dvd…

I will not miss waking up early to get ready to go to the orphanage, but I will miss sharing the rickshaw with Paarth, Akanksha and Aishwarya to get there, and those amazing kids that we were family with for few months.

It’s not time for tears, just time to be thankful for this amazing and great experience that it’s finishing. But this is not the end yet.

Rajasthan, Tamil Nadu, Hyderabad, Goa and Mumbai will be next stages for me, opportunities to keep learning about this country, this culture, this people. Opportunities to meet new friends and say good-bye to some of my already old-friends in India.

Anurag in his pre-wedding party

I was invited, a bit by surprise, to a wedding in Kolkata. I met the groom the previous week in the video production of the 1st International Young Chef Olympiad. He is a great guy. He studied Film and Television Diploma in Ranchi, in the institute where I’m working, in the first batch, four years ago. That’s why we went to Kolkata to work and why we were invited to go back the following week for the wedding.

I have to admit that the idea of an Indian wedding sounded very nice and I was looking forward to it. Then I was made aware that both the groom and the bride, are Christians, so the wedding would not be like a traditional wedding here. But I still thought that it would be a nice a experience and fun.

So, Rituraj and myself took once more “the fastest train in India” to Kolkata on Wednesday afternoon. I watched several movies on my laptop, as we still had more than 8 hours of train. We arrived to Kolkata at night, and took a taxi to our friend’s place where all his family was gathered to have a pre-wedding party. So I got to meet his sister, parents, and tens of cousins, aunties and uncles came to Kolkata from many Indian, and non-Indian (Dubai) cities, just for the celebration. It was a nice party on the roof top terrace, with 5000 W of Bollywood songs in the speakers, dancing, booze and food.

We took a taxi when the party was over to get to a guest house on the other part of the city, but closer to the church, where the family had book rooms for guests. We had to share it with 6 other people, snoring…

In the morning, we went to my some shoes for me, so I could look a bit smarter. We had some trouble with this, and we end up taking a taxi to a shopping mall, suggested by a Ritu’s friend from Kolkata. We also had some fast-non-indian food and get back to the guest house to get ready for the wedding. I didn’t bring any suit to India, so I decided to go for the local smart style: kurta. While getting ready, I was seeing the male guys that we were sharing the dormitory with, dressing with suits and tie. I thought that this might be because they were family.

When we took the bus that the family organised for all of us in the guest house to go to the church. And I realised that I was the only male wearing Indian dress. All the rest: suit and tie. And finally, we got to the church, St. Paul Cathedral, and definitely, I was the westerner that everybody was staring at, dress Indian, while all the Indian males where wearing western outfits!

I didn’t have much time to feel bad for this, as I was needed to help with the video recording of the wedding. So, I took the camera and started shooting and moving all around the church, like fish in the water.

Both families belong to the Church of North India (Anglicans), so the ceremony was slightly different to the ones I have done many times in my life (at both sides of the altar). But basically the same structure and rites: rings, gospel, homily, signing… It was nothing like a Hindu wedding, but still interesting. The Indians are famous for not displaying any affection in public, even in their wedding. So, after the groom discover the bride’s face below the veil, he only kissed her forehead. And everything in general was quite restrained: no clapping, no throwing rice, not even tears.

I really expected the Indians be very loud and party ready, that’s why I was disappointed in the reception after the ceremony, in the Parish multipurpose building off the church. We were offered some non-alcoholic refreshments at arrival, and I realised then that there will be no booze that day, at a wedding reception. And unfortunately I was right. When the newly wed couple arrived, a successions of speeches was started by the parents, best men, etc. All the guests were patiently sitting, or standing, just waiting, listening to the speeches… After that, everybody was invited to go and congratulate the couple and bless them at the same time that the dinner was made ready in the buffet, on the garden. A long queue was created, and ceremoniously all the guests were approaching the couple, giving them a present, and greeting them. This took about 2 hours. I’m not exaggerating. There was no music, no dance, no booze. Just the food outside, and the presents ceremony inside.

I went for dinner. The food was fine. More or less the typical one that I have been having all these months in India, nothing fancy. After dinner, we finished some shooting with the camera. We congratulate the couple ourselves, and we went to the guest house, to our room. When we took the taxi, it was five minutes to ten in my watch!

Well. It wasn’t the craziest party of my life. It wasn’t  what I expected in India. It was a nice ceremony where two young people confirmed a commitment of love for life in front of all of us. And I learnt more things about India. 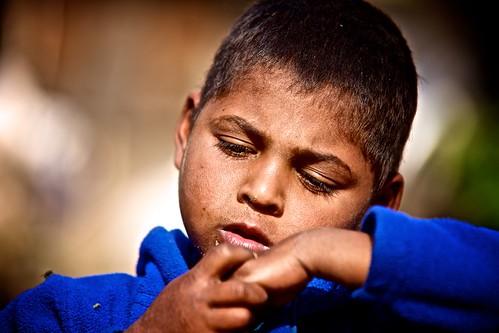